The kids love a playhouse, and so do I! I don’t like to perpetuate gender stereotypes, but there are some of the boys’ games that I simply can’t get excited about, so I’m glad we can all agree that play houses and play kitchens are great fun.

When I saw this collapsible playhouse by Jennifer Kirk at She Knows Parenting I was in love with the idea and just waiting for a way to use it. With baby J’s birthday coming up, I decided to make him a play fire station. The folding house was a perfect foundation for a fire station. I used the concept from She Knows Parenting but built my house differently, so here’s the tutorial.

I started with two big and sturdy boxes I had saved from some living room chairs I bought. I had deemed them TGTR (Too Good To Recycle) and they were taking up a lot of space, so this was a perfect use. They are very similar to the “dish pack” boxes used for moving, if you want to try to recreate this project more exactly.

Building Tutorial
Here’s a sketch of the basic design. You can assemble it in more than one way, depending on what pieces you have. As a general tip, I think the house will fold more smoothly of you leave a gap between the panels you tape together, so the joints have more flexibility.

Since I had already broken down my boxes, I started with two pieces with two panels each. You could use a single whole box, opened flat. The two center panels will be the front of the house, and the side panels will form the side walls of the house. (shown below, top left)

Since the floor only connects to the sides of the house, I cut the bottom panels off the center panels. (shown below, top right)

I then taped together the center seam. This isn’t necessary if you are using a single piece, though you might still want to reinforce the seam. (shown below, bottom left)

For the front of the house, I cut a peaked roof and an opening for the door. My door is wide, because I am going to make it a fire station, but you could do a smaller and maybe add some small windows for a regular house. (shown below, bottom right)

Next, I made jointed panels for the floor and roof. I spread glue on the bottom flaps of the house and attached the floor. I put some heavy objects on the floor of the house to make sure it was glued securely. After the glue dried, I reinforced the joints with tape. (shown below, left)

I attached the roof by spreading glue on the top flaps of the sides of the house and clamping the roof in place with binder clips, while the glue dried. (shown below, right)

I finished the house by gluing some cardboard to reinforce the front of the house above the door and then taping all the joints and raw edges.

Here are some pictures of the finished house. My floor doesn’t fold upwards very smoothly, and I didn’t want to force it, so it’s quite large when folded, but it is completely flat. I think it would fold more compactly if I had left bigger gaps between the pieces of cardboard, but then again, that could make the house less stable. Overall, it works well. 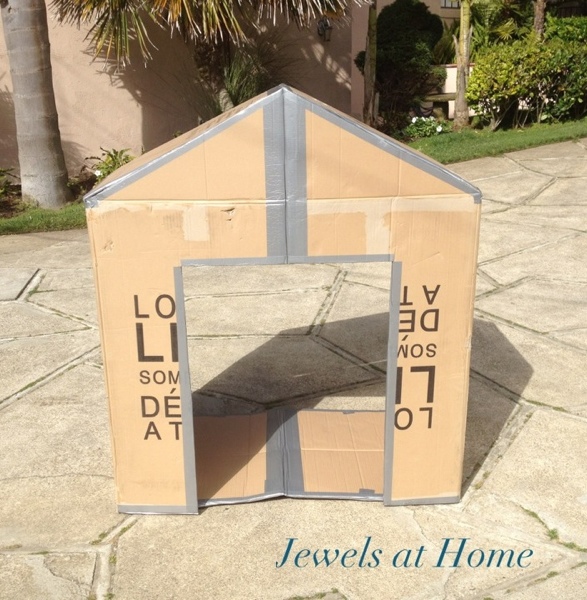 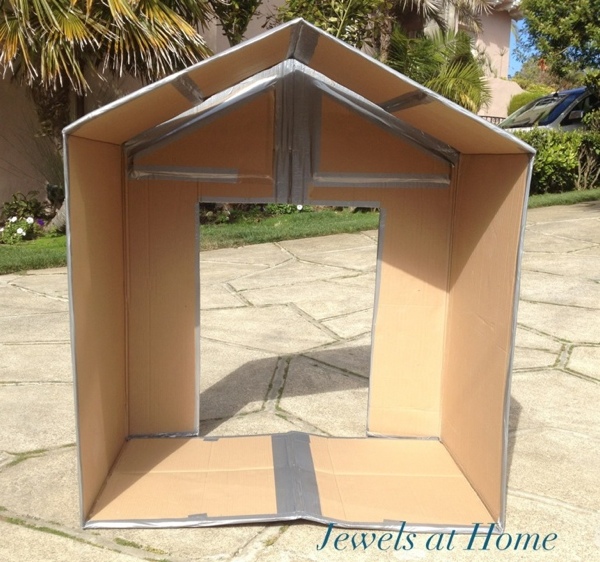 The next step is decorating the house to look like a fire station. I hope I can pull it off this week!